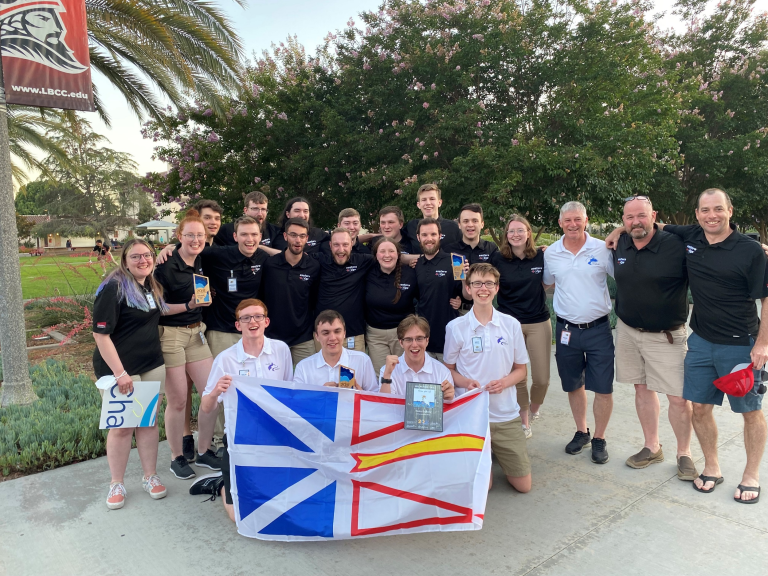 At only 20 years old, Jadzia Penny is already making her mark in the world of robotics. She began participating in regional competitions in the ninth grade, igniting a passion that has guided her path to where she is today.

Throughout her high school education and continued involvement in extracurricular robotics, Jadzia developed a plan when she began studying at Memorial University.

“The robotics I’ve done has always been underwater robotics which led me to be really interested in the ocean sector,” said Jadzia. “I’m also passionate about climate change, so when I came to university, I knew whatever I ended up doing would have some kind of positive effect on climate change, whether that’s mitigating its effects or in the alternative energy space.”

The MATE ROV competition uses remotely operated vehicles (a.k.a. underwater robots) to inspire and challenge students to learn and creatively apply science, technology, engineering, and math (STEM) to solve real-world problems and strengthen their critical thinking, collaboration, entrepreneurship, and innovation. Teams from all over the world participate with their ROVs to the test against a set of mission tasks.

“The tasks are meant to mimic real life challenges that you would want to solve with an ROV. You are also asked to prepare technical reports, create a marketing display, and deliver engineering presentations,” said Jadzia.

Having been involved in similar competitions dating back to her early robotics days in the ninth grade, despite only entering her fourth year of university, Jadzia has been honing her ROV skills for the better part of eight years. As she inches closer to graduation, her focus has begun shifting to possible careers that allow her to live out her passion and maximize the skillset she continues to grow through her electrical engineering studies.

Jadzia had already been hired by SmartICE when the company was approached by COVE to participate in the Internship Program. When she learned of COVE’s involvement, she knew it was a perfect match. “When I learned about COVE and started reading up my first thought was – wow,” said Jadzia. “Having been interested in ocean tech for awhile and seeing they had a full internship experience around that, it was right up my alley.”

The COVE Internship Program is a collaboration between companies in the ocean sector across Canada. Students gain experience in the thriving ocean technology sector with ongoing support, training, mentoring and networking opportunities organized by COVE.

“It’s been an amazing experience to take the technical skills I’ve learned from extracurriculars and apply them to the workplace. It’s a great feeling to approach a new project and say, ‘I know how to do this, I’ve done this before’,” said Jadzia.

COVE supports these employers and the broader ocean sector in building a pipeline of tomorrow’s ocean tech “superstars” – a word Jadzia does not fall short of. Along with her thirty-four fellow internship participants growing and learning each day under the guidance of top ocean tech leaders, the future of the ocean sector is in excellent hands.