AN OCEAN OF OPPORTUNITY 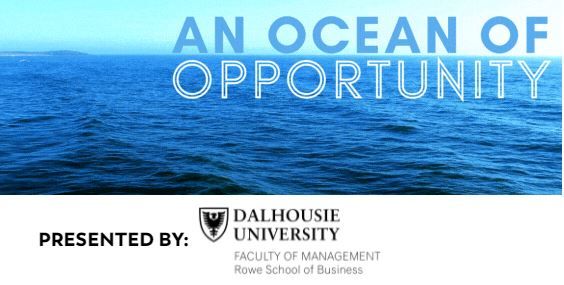 Nova Scotia has become a world-class hub of innovation for research and technology in the oceans sector. There are currently more than 300 diverse companies involved in this industry providing goods and services in fisheries, tourism, shipbuilding, life sciences, renewable energy and marine science and research, to name a few. Including spin-offs, ocean related industries generate approximately 12.2% of Nova Scotia’s overall GDP.

This has created an ocean of opportunity for start-ups and businesses looking to get involved. The Halifax Chamber of Commerce and our Presenting Partner, Dalhousie University Rowe School of Business, invites you to join us for a discussion with the leaders at the forefront of the ocean industry in Nova Scotia to take a deep dive into the potential of the blue economy.

During the panel discussion, we’ll hear about the work they’re doing at their respective institutions and the opportunities available to the business community. In the last half hour, we’ll finish off with a live Q&A where members can ask their questions directly to the experts.

Register today and submit your question!

Jennifer LaPlante is the Executive Director of DeepSense, an organization focused on driving economic growth through increased comprehension and adoption of artificial intelligence in the Canadian ocean sector.

She holds an MBA and is an MSc in Computing and Data Analytics candidate. Jennifer is an active member of her community sitting on the Board of Directors of the Halifax Harbour Bridges Commission, Victoria Hall Society, and the Arthritis Society.

She is a past member of the Nominating Committee for the Canadian Internet Registration Authority (CIRA). With an emphasis on AI, she is a member of the Government of Canada’s AI Public Awareness Working Group and is co-organizer of the Halifax Chapter of Women in Machine Learning and Data Science (WiMLDS), a global organization that aims to support and promote women and gender minorities interested in the fields of machine learning and data science. Jennifer was named one of DataIQ 2021 Top 100 Influential people in AI.

Catherine Blewett comes to the OFI after a long and distinguished career in provincial and federal public service, most recently as Deputy Clerk of the Privy Council and Associate Secretary to Prime Minister Justin Trudeau’s Cabinet. Since March 2019 she has been Canada’s representative for the international High Level Panel for a Sustainable Ocean Economy, a unique group of world leaders committed to developing, catalyzing, and supporting solutions for ocean health and wealth in policy, governance, technology, and finance.

Previous to her current position, she served as Canada’s Deputy Minister of Fisheries and Oceans where she led on oceans for the G7 and achieved the country’s Mandate on Ocean Protection targets of 5 per cent by 2017. She also led the development and implementation of key fisheries legislation between June 2016 and December 2018.

From 1990 until her departure to Ottawa in 2016, she has held many increasingly senior positions in the Nova Scotia provincial government, most recently as Clerk of the Executive Council and Secretary to Cabinet, Government of Nova Scotia. Her previous portfolios included the Atlantic Canada Opportunities Agency (ACOA), Citizenship and Immigration, Office of Aboriginal Affairs, and Intergovernmental Affairs.

Before joining COVE, Melanie was the Director of Strategic Initiatives for an energy and services company with $30B in assets. She was a trusted advisor, analyzing global markets and identifying business strategies to position companies for growth. Prior to this, she held positions of increasing responsibility overseeing 40+ employees and $500M+ budgets.

Having served in the Royal Canadian Navy, Melanie is well-versed in strategic planning, operations, and stakeholder relations. Her Board appointments have included international marine businesses, national industry associations and a professional regulatory board.  Melanie has been involved in Canada’s innovation community for over 15 years and is an expert in the commercialization of emerging technologies developing plans that turn new technology into mature-revenue generating engines.

An internationally recognized thought leader, she offers a global perspective and has been a notable expert for the International Energy Agency, the United Nations Environment Programme and the Intergovernmental Panel on Climate Change. She was hand-selected by the delegates of 30+ countries from the IEC to Chair global industry standards for marine technologies and co-led the development of international certification for renewable energy technologies and projects.

She has earned multiple awards including Canada’s Clean16 Award for her outstanding contribution towards clean capitalism and has been named Atlantic Canada’s 25 most powerful women by the Atlantic Business Magazine.

She has been an invited speaker to numerous events, including TEDGlobal.

Melanie is committed to the global community; she has been chairing the UNICEF Canada’s Water for Life Gala for five years running and is a business mentor with Immigrant Services Association of Nova Scotia. She is an accredited professional engineer graduating from the University of Waterloo, Canada and has an ICD.D designation from the Institute of Corporate Directors.

We want Atlantic Canada to seize every opportunity it can in the post-pandemic world. We know that the greatest potential for job creation and revenue lies in the sustainable blue economy. When we invest in sectors like ocean tech and science, we are positioning our coastal communities to build back even better in the long term.
– The Honourable Bernadette Jordan, Minister of Fisheries, Oceans and the Canadian Coast Guard and Member of Parliament for South Shore – St. Margarets